The following is an excerpt from the Hidden Child policy paper from Hestia, and so focuses on the needs of the women and children in many of Hestia’s refuges. We at UK SAYS NO MORE would like to acknowledge that men too can be victims to domestic violence, and although this piece refers to women and children specifically, abuse can affect anyone of any gender, race, age, sexuality or ethnicity.

950,000 children across the UK are affected by domestic abuse, either directly as victims of violence, or indirectly in terms of witnessing violence[1]. For many women, this is the tipping point at which they seek help – in a recent survey of 86 women with children living at Hestia’s refuges, 79% reported they had left their abusive partner because they feared for their children’s safety[2] (Hestia, 2015).

Children are exposed to domestic abuse in multiple ways and may themselves be used as part of the violence[3]. Child maltreatment and domestic abuse frequently co-exist. Since the 1970s, studies have consistently found that among 65-77% of households where women are subject to domestic abuse, children are also physically maltreated[4]. Another report found that 62% of children of individuals supported by their Independent Domestic Violence Advocates (IDVAs) in 2013 were themselves subject to abuse[5]

Exposure to violence at an early age

As one-quarter of children in high-risk situations are under three years old, and the average period before a victim seeks support to leave an abusive relationship is 2.7 years, many very young children have been exposed to severe abuse for much of their early years–a crucial period for early development which influences life chances[6]. Research has shown that infants as young as one year old can experience trauma symptoms as a result of witnessing domestic violence[7]. Symptoms may include eating problems, sleep disturbances, lack of normal responsiveness to adults, mood disturbances and problems interacting with peers and adults. Clinical reports indicate these babies often have poor health, poor sleeping habits or irritability, and exhibit high rates of screaming and crying[8].

Early personal, social and emotional development has a huge impact on later well-being, learning, achievement and economic circumstances. That is why the Childcare Act 2006 places a duty on local authorities, ‘to improve the well-being of all young children in their area and to reduce the inequalities between them’[9].

Psychological impacts of exposure to abuse

Witnessing domestic abuse can have long-term consequences for a child. Those who are not direct victims often face some of the same behavioural and psychological problems as children who are physically abused[10]. Witnessing domestic violence is also related to poorer emotional well-being. Emotional responses to abuse vary greatly, but can often include aggression, introversion, secretiveness, self-blame, running away, difficulties at school, bedwetting, nightmares, eating difficulties, self-harm, depression, suicidal ideation and attempted suicide, social isolation, poor social skills and developmental delay[11].

In a study of 3,614 children aged 12 to 17 years, it was found that exposure to parental violence was associated with an increase in the symptoms of (PTSD) and major depressive symptoms above any effects of gender, age, race, income or history of other traumatic events[12].

Long-term impacts of exposure to abuse

Children who live with domestic abuse are more likely to be exposed to abuse. They may be exposed to a violent and volatile environment if they are being held by a parent during violence, may be in the same room or may be protecting a parent from the violence.

Working together to Safeguard Children (2010) recognises that: “Domestic violence has an impact on children in a number of ways. Children are at increased risk of physical injury during an incident, either by accident or because they attempt to intervene. Even when not directly injured, children are greatly distressed by witnessing the physical and emotional suffering of a parent”[14].

The above is an excerpt from Hestia’s policy document Hidden Child (2015), which looks at the struggles and specific needs of children in domestic abuse refuges. Find out more and download the paper here. 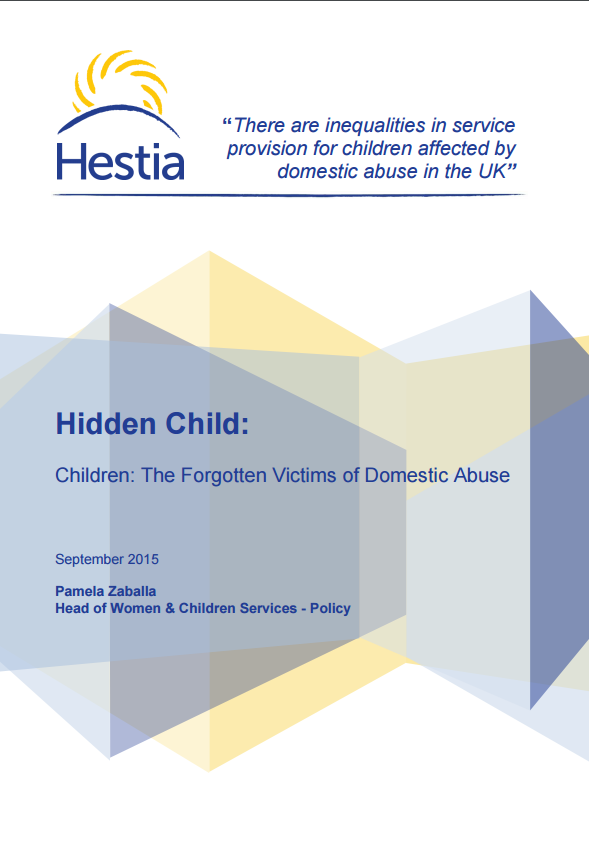 [2] Hestia (2015), From Victim to Survivor: A revised study of the obstacles faced by domestic abuse victims in London.

[8] NSPCC (2011) All Babies Count: Prevention and protection for vulnerable babies. Accessed online on 17th of May 2015  http://www.pupprogram.net.au/media/9877/all_babies_count.pdf

[9] Department of Education (2013), Sure Start children’s centres statutory guidance for local authorities, commissioners of local health services and Jobcentre Plus. Accessed online on the 14th of May 2015 https://www.gov.uk/government/uploads/system/uploads/attachment_data/file/273768/childrens_centre_stat_guidance_april_2013.pdf

[14] HM Government (2010) Working Together to Safeguard Children: a guide to inter-agency working to safeguard and promote the welfare of children at page 34, 1.20 www.education.gov.uk/publications/eOrderingDownload/00305-2010DOM-EN-v3.pdf

We can all play our part in ending domestic abuse and sexual violence. You can make a difference by pledging to learn about these issues, speak out and share resources and information. GET NEWS & CAMPAIGN UPDATES FROM US