Defining love comes with so many varying narratives and it’s certainly about more than just romance, which is why I’m not writing about any lover of mine. Frankly, they aren’t worth penning (or typing) anything about. Instead, I’m putting down in words why loving myself has been of indispensable value to my being. Sounds cliché, I know, but up until now, I haven’t been able to write about my experience behind it. Hell, I still find it hard to talk about. Nonetheless, here it is, laid bare.

Innocence, fragility, naïvety; just some of the characteristics typically associated with a teenager. Suffice it to say that I was all of those things aged 15. How then does a girl that age navigate her life after becoming a victim of sexual assault? Well, I traipsed around loathing every part of my being for a long time. Also, I genuinely believed that I wasn’t worth someone else’s love let alone my own and surfacing below the trauma was my confidence, trapped there by my fear of being judged. I was completely convinced that I had been and always would be labelled as “damaged goods,” and that no one would ever want me. The only thing I can liken it to is when you get a cut that doesn’t stop bleeding, it bleeds and bleeds until you get it stitched up. What you’re left with is a permanent scar; a sign of imperfection. In this day and age, with images of perfection plastered everywhere you look, it was hard not to feel the way I did.

The thing is, the memory of what happened is worse than what happened itself. It is that same memory, however, that made me realise I wouldn’t be able to feel love without having a good relationship with myself – scars and all. I had already let the perpetrator get away with what he did because, well, threatening to “financially destroy” my family definitely put a spanner in the works. Letting a pathetic excuse for a human being get away with a crime was one thing, I couldn’t let him get away with negatively affecting how my future panned out too.

I, like most people, desire to be desired. In order to be desirable, I knew that ultimately I needed to accept who I am and also think about the kind of person I would be happy to be. Granted, this sort of thing doesn’t work itself out overnight. It’s been nine years since what happened, and from time to time I still ask myself  “am I damaged goods?” Only to answer “no.” It has taken a very long time to say that with conviction. Feeling a sense of self-worth has been hard to grasp, but what I’ve been through has taught me how to do exactly that.

It is certainly ironic that for the very same memory that falsified my self-image I have also learnt how to love who I am. 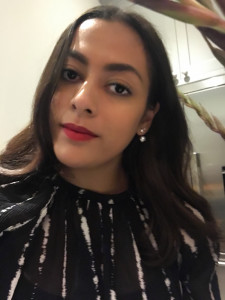 A writer and avid style and design enthusiast, Amira Hasan has a passion for writing short pieces which have been published on Amaliah, Project Consent and a handwritten letter featured in Kreativ House for the exhibition ‘Letters to Lost Lovers’ in February 2018. Her work is inspired by her experiences with mental health and well, her thoughts that come by day to day. Her spare time is often spent curating her personal style is something she will be showcasing alongside her writing, which you can look at on www.amirahasan.com. She is the resident Writer and Researcher for Change the Script.