Boys and Men abused by Women

There is an established and well documented wall of silence and secrecy associated with sexual abuse. The powerful and destructive emotional processes of guilt, shame, self-blame and fear of being believed all play significant roles in maintaining this silence, whilst organisations such as Survivors Manchester strive to assist men in breaking their own silence and reclaiming their lives.

Opening discussion and debate regarding what are often extremely emotive and for many people, uncomfortable issues represents a key factor in breaking the silence, in the hope that doing so may encourage many to reflect and/or continue these discussions among yourselves.

Women who abuse boys and young men are what I within my role as a clinical lead and psychotherapist here at Survivors Manchester, consider to be an issue that warrants open dialogue and debate, and therefore represents the topic of this piece.

The reductive nature of gender stereotyping is undoubtedly a harmful process, and yet still represents a socially and culturally informative phenomenon of momentous power. In keeping with such gender myths, adjectives such as nurturing, caring and loving are commonly used to describe female characteristics, whilst their male counterparts are subject to alternatives such as strong, aggressive and powerful. Such misguided generalisations sound ridiculous in their simplicity, but for both boys and men who are abused by the women in their lives, who are as susceptible to social and cultural messages as the rest of us, I believe that they play a crucial role in the destructive legacy of such abuse. For boys abused by their Mothers for example, there is something inherently present within this damaging process that results in these boys feeling so ultimately unlovable as a result, that the long-term damage caused at a core belief level is quite literally devastating in its cataclysmic power.

Boys, like the rest of us grow up being drip fed the cultural and social messages via television, radio, cinema, fairy tales, video games and social media the fantasised ideal of women and Mothers as these loving, caring archetypes.

Therefore, when their own experiences are so dramatically contradictory it understandably isn’t the female perpetrator who is felt to be at fault but the boys themselves. “I am unlovable”, “I am bad”, “I am worthless”, are all commonly held core beliefs by male survivors of female perpetrated abuse. I am of course the first to admit that these core beliefs are by no means unique to male survivors of female abuse, as I am acutely aware that is not the case. However, I do believe that specialist services such as ours that work with male survivors of sexual abuse and/or rape need remain sensitive to the differences for men who have been abused by either gender, and strive to provide clinical services informed by these differences as averse to merely grouping all types of sexual abuse together irrespective of the perpetrators gender and treating them accordingly. In grouping sex offences together regardless of the gender of perpetrator we are in effect hiding the specificity of the problem within a wealth of data.

For too long there has been a refusal to acknowledge that women commit sexual offences, and can and are often the perpetrators of abusive behaviour. Due to the aforementioned effects of social and cultural conditioning there seems to be a significant barrier to be overcome regarding the comprehension that women can also commit heinous crimes. The English legal system itself colludes with this sentiment with its statement that rape is a crime that only men can legally commit.

Let us ourselves as a society collude no more. Let’s begin to acknowledge, recognise and open the lines of dialogue concerning the fact that women also abuse. In doing so we are by definition reducing the stigma associated with the phenomenon and assisting men in coming forward and ultimately breaking their silence.

If you feel you need any advice and support, or are considering reporting to the police, please get in touch. Survivors Manchester would love to hear from you and help in any way they can. You can reach them on the support line on 0161 236 2182 or via email at isva@survivorsmanchester.org.uk 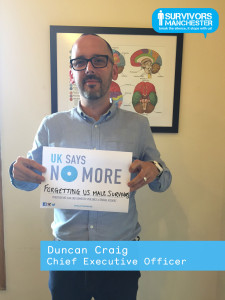 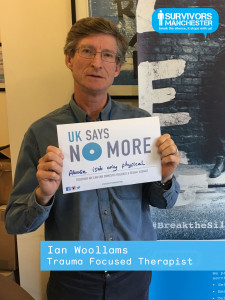 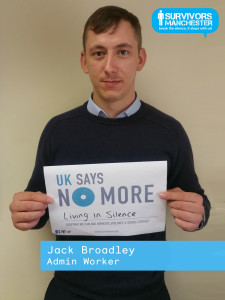