Written by Melissa Morbeck of The Corporate Alliance Against Domestic Violence

Age is a funny thing – there is a certain perspective and calmness that washes over my work and my life, allowing me to see the ups and downs, struggles and successes in a light of hope and serenity. Oh, that serenity doesn’t often come into play when I am bargaining with the copier to give me my print outs, but the long view is a valuable part of my life and being.

So much has changed since I first picked up a phone in a dark office where I worked under an alias and called the prosecutor in Los Angeles and had an out of body experience chastising him for not including a safety number when talking about domestic abuse; if he was going to talk about this, he needed to provide resources and help. His secretary was so incensed that she connected me to him and stayed on the phone until I was invited to a meeting with him.

That was how it all started. A frightened shell of a person hearing the voice inside her – and others starting to listen.

30 years ago, whilst still living in the US, I watched on TV as a woman was almost beaten to death by her husband on her front yard while the police stood in desperation trying to get him to stop; they were unsure if they could go onto private property and the violence was so horrendous. That made an impact on so many of us; if we reached out for help no one would be there; we were told by our abusers if we left they would do the same to us and no one would help us.

30 years ago there wasn’t a national conversation in the US or here in the UK nor was there on any level of recognition in the public consciousness that domestic abuse was even wrong or existed. Many of us knew what we were living through – there was no national help line, shelters were not connected, coercive control, stalking, and domestic violence were not illegal and no financial support to start over. We had wonderful people and shelters who tried to help, but this was very much dependent on where we lived and a matter of luck.

We worked tirelessly to start a conversation with any sector of society that would listen. 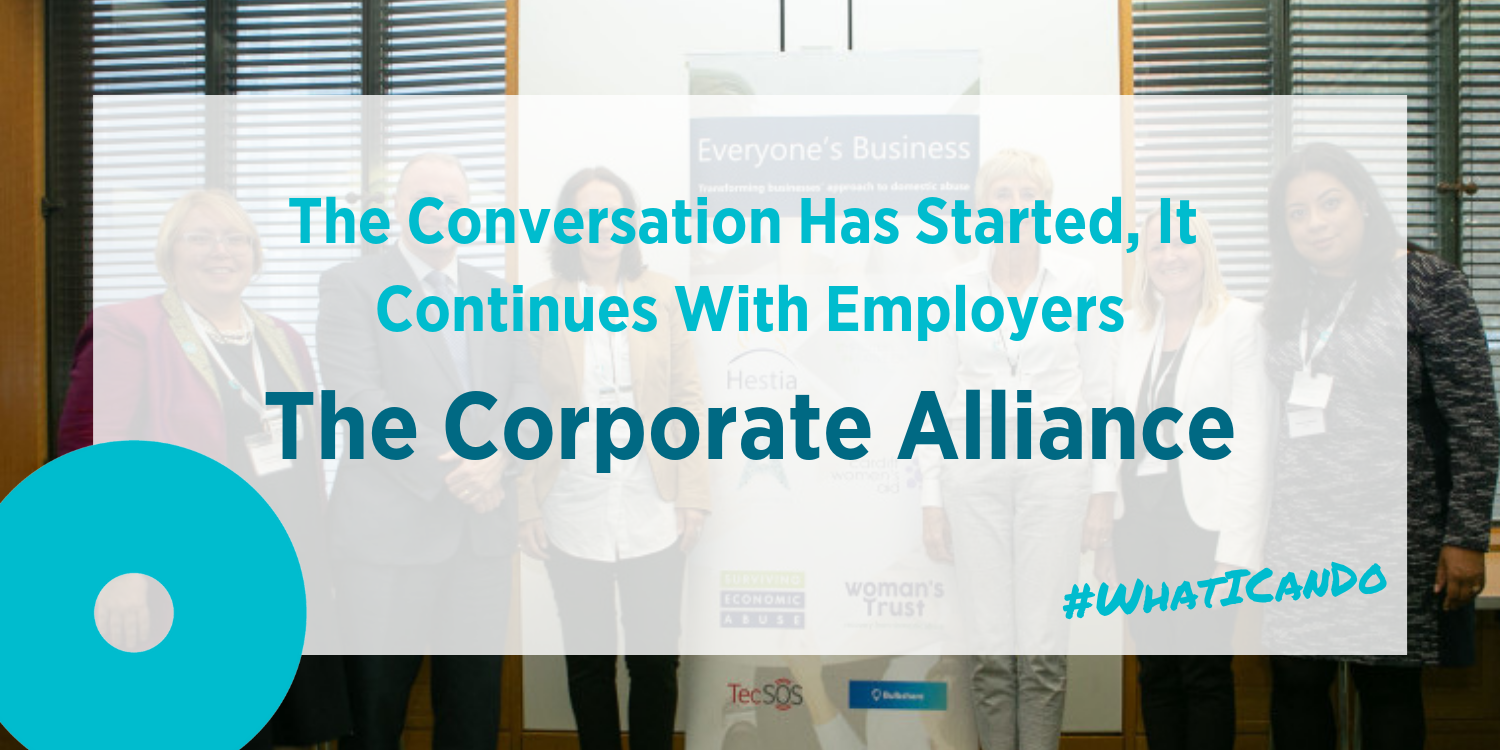 In the US, Many of us worked on speaking with employers, as workplaces had been our salvation. We started charities, political groups, went on boards of national charities lobbying for funds, awareness and changes in society and the law. We worked to bring shelters together and create a national framework so they could resource and leverage their excellent work. We worked to change how hospitals, doctors, midwives, psychiatrists, solicitors, judges and workplaces responded to women enduring violence. We worked with the Presidents Commission and fantastic employers to create programmes of empowerment and safety for women fleeing violence. We trained police, doctors, employers, anyone and everyone who would participate. We challenged academics who called us Battered Women and named those who abused as Men who Perpetrate – why are we labelled with a scarlet B across our chests and then people second and perpetrators named as human first?

We created programmes in schools and universities and marched – oh we marched! It was such a time of collaboration, frustration, challenge and hope. Those years tuned into what now looks like today – each challenge being a step to the next conversation, failure, success and lives changed.

We worked by creating The Corporate Alliance Against Domestic Violence, the sole purpose being to get employers to help staff get safe. This was also a journey – at first advocating that any man who was abusive be fired to coming to terms with the fact that women and men are abused and that keeping employees who perpetrate employed can be the best way to create change. We worked with any employer who would listen, championing the wellbeing and safety of people who endured, slowly appreciating the role of the witness and bystander, and how all of this was linked to a holistic approach and wellbeing. We raised the profile of the employer as a critical player in prevention and intervention, seeing that a place of work was often the safest place for a person enduring violence. We worked with employers first in America, then the UK, Spain, the Netherlands, Australia and New Zealand. The work always balanced the needs of the person enduring with the positive change employers could reasonably make to support each employee being safe. To date, we have supported well over 50,000 people globally.

Recently the work has almost come full circle – taking part in a unique initiative to support employers in a holistic way that suits their business needs. Everyone’s Business is dedicated to creating an overall change in how employers think about and approach domestic abuse. The program provides employers with tools they need to strengthen the response and support available to employees experiencing and perpetrating abuse. We are continuing to evolve how we engage in this conversation and in changing lives.

To many reading this it may appear that the conversation hasn’t changed, but it has. We can now speak openly about domestic abuse and violence without fear of being told this doesn’t happen in ‘my back yard/workplace or home’. By going on this journey we have learned that the voice of the person in the middle of the nightmare is the most important. We have shelters connected, we have sectors of society engaging that have never engaged before, we have moved past the initial stages of change onto a sustainable shift in our world.