Written by Kate Varah, Executive Director of The Old Vic

Writing this mid-air on a flight back from New York where we’ve been at the opening of GIRL FROM THE NORTH COUNTRY at the Public Theater in Manhattan, an Old Vic production written and directed by Conor McPherson. To dispel any illusion that this is an everyday occurrence, it was a big moment for us. The alchemy needed to turn a show from the kernel of an idea to development, onto stage, passing through the critical and audience response, to the West End, and then to New York is rarely achieved. This week was a reminder that it’s important to celebrate when things go right – and mark the collective will it took to get us there.

GIRL was one of a string of world premiere productions we have produced since Matthew Warchus became Artistic Director in 2015, and began commissioning new work in earnest. The Old Vic itself turned 200 this year, which gave us an incredible platform from which to share our work with a wider audience (alongside having a street party, marching band procession and open house in the theatre on our actual birthday). During the bicentenary, we presented an entire Season of world premieres – new plays in an old theatre highlighting that The Old Vic (birthplace of so many cultural titans like the National, ENO and Sadlers Wells) has always been at the forefront of creative innovation. 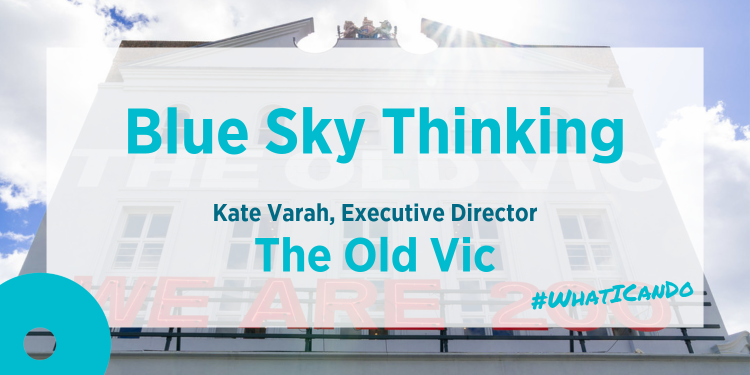 In a year where there should have been only rejoicing, there was also challenges to manage through. Headlines broke at the end of 2017 regarding the alleged conduct of our former Artistic Director, and the organisation began a complex and responsible process of internal review. A swift decision was taken to investigate (we had no complaints on file), which was an all-consuming exercise.

Anyone who has managed through a crisis knows that one of the most important tasks is to keep the day to day operations of the business going whilst carrying out the careful work required to resolve the issue at hand. Achieving this balance is not easy, particularly perhaps in a theatre where your job is to entertain and inspire. A CHRISTMAS CAROL, directed by Matthew Warchus, was the production in rehearsal at that point, and the building resounded with the sound of the cast learning how to play the handbells, sing carols, dance jigs. Managing the crisis alongside creating this production could, on the face of it, have been a jarring collision. Yet in fact, it was the complete opposite. A CHRISTMAS CAROL was possibly the most joyful show we’ve ever had in the building (we’re bringing it back this Christmas by popular demand), and through it the healing power of theatre never felt so clear or necessary. At a time of introspection and renewal, we were incredibly thankful for the perspective it gave us.

And of course we learnt a lot from those who came forward to share their stories. Enough to seed a new idea, a way forward for us, and (as it transpired) for other businesses too. Through our investigation, we found that there was a delta in provision which could stop people coming forward to share their experiences of workplace abuses of power. There is a gap that exists between a quiet conversation at the water cooler with a friend to flag ‘something doesn’t feel right’, and the formality of raising a concern with HR, line management, unions. When something goes wrong at work, and you don’t want to raise it formally, where do you go for help?

The Old Vic’s response has been to create a new workplace behaviour initiative, the Guardians Programme. A Guardian is a trained member of staff who acts as confidential sounding board, sharing the culture of that organisation and signposting those who come forward towards the various escalation channels available. Initially this was just intended for The Old Vic to benefit from. But having started life as an employment lawyer, I knew from my time working with other sectors that this was almost certainly not just an issue bespoke to the theatre industry. Everyone struggles with this issue of escalation of concern. And it is particularly resonant when freelancers or those at the beginning of their careers are concerned. The more you perceive you have to lose by speaking up, the less you are likely to. Of course the preference is that employees use formal channels to raise concerns. But our learning was that people didn’t always feel confident in doing so, and lost any ability to be heard as a result.

We reached out to others and shared what we’d learnt and the scheme we’d created. The more organisations we talked to, the more we realised that the concept of Guardians was universal in its application. Six months on, the Guardians Network was launched this week, a group of over 50 organisations from different sectors (law, fashion, advertising, financial services, media, third sector) who are exploring implementing the scheme in their own workplaces. More are signing up by the day. The Programme is simple (and free) to implement. All the resources are free to access on our website. Lewis Silkin (our like-minded lawyers) and Joanna Nicolas are generously providing pro bono training for any organisation within the Network to get their Guardians up and running and keep them trained.

Many have asked me how we measure success? How do we know whether the Guardians Programme is working? The simple answer is that we don’t. Guardians are necessarily devolved from the management structure. I receive regular anonymised reports letting me know trends or patterns emerging, so we can meet them head on with training or support. And the Guardians may be successful at supporting someone through to raising their concerns formally. But beyond that, we won’t know for sure – but I am confident that does not matter. First, I would rather have some information than none. Second, the culture of the organisation is strengthened by having Guardians in place. Anyone who works with us knows that the Guardians exist. That means that anyone in our building knows that we encourage a sharing of concerns openly. They act simultaneously as a deterrent and a support.

We aren’t claiming that the Guardians scheme is a global panacea. It’s a pastoral initiative designed to work alongside and compliment all of the other excellent programmes that many of us already have in place. The Guardians add an additional layer of support for our staff and for our organisation as we focus on enshrining our values, protecting those who work with and for us, and ultimately strive to create an environment when none of these protections are necessary.

Find out more about UK SAYS NO MORE’s partnership with The Old Vic here.