In 2018, we are excited to launch our Know More Podcast – a space to host discussions around domestic abuse and sexual violence and how we can all be part of the solution, hearing from survivors, practitioners and activists who are all working to make real social change.

We sit down with writer, performer and activist Imogen Butler-Cole to discuss the healing process after experiencing sexual violence, shifting responsibility to create change onto the perpetrator, and her play, ‘Foreign Body’. 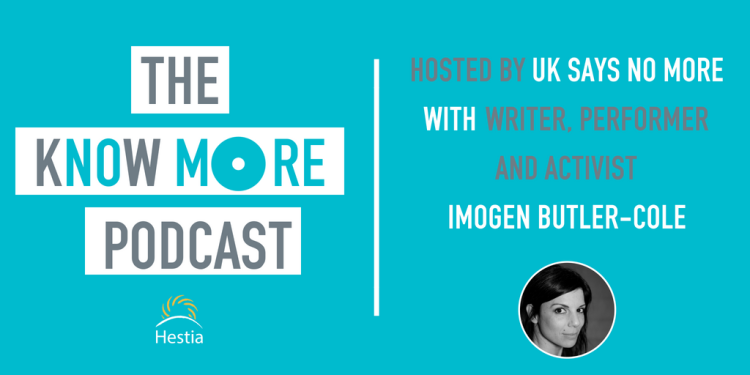 Listen to the podcast here:

You can also listen on iTunes here. Don’t forget to subscribe!

Imogen is an a

ward-winning actor and theatre maker. Current projects include touring her solo play Foreign Body (which has been at the Soho Theatre, Southbank Centre and VAULT Festival) which is about healing after sexual assault and features her testimony along with those of 8 other women; and directing Nina Millns’ Delete which will be at the RADA Festival in July. Imogen campaigns against sexual violence alongside On Road Media and trains business professionals in communication for RADA in Business and The Old Vic.

Read an excerpt below from Imogen’s script for one of her latest pieces, ‘What Happens Next’.

The first time I actually had sex with someone I was like fifteen years old and he was twennyONE.

So an it wasn’t until it was years and years later when I was talking to a friend about this when she was like ‘but that’s statutory rape’, right,

At That kind of age, specially with someone so much Older, I didn’t really Feel like I could,,, say noooh,,, or ask questions, or say something else or, Do anything else, so,,

… just I didn’t Feel like I had anyyy… Say, in the matter?

I think having Done that? it just beCame like, yeah that’s just the thing that you Do..

… … ssso I guess That voice came in very Early on, as Well, th-thatt…. I must be somehow deFective,

A: Two star highschool football players in Steubenville Ohio,’ have been found guilty of raping a West Virginia teenager/B:These two, young men that had such promising futures, star football players, very good students, lit’rally watched as, as they believe their life fell apart.One of, one of the the’young men Malik Richmond when’at sentence came down, he collapsed, he collAPSed in the arms of his attourney, he said to him my life is over no one is going to want me now.

A: WHAt’s the LASting effect though, ,, on two young men being found guilty in Juvenile Court, of, rape, essentially?

C: W’you now Candy we’ve seen here a courtroom drenched in tears and and tragedy, and whenTHAT verdict is handed down,, lives are destROYed. The most severe thing with these young men is being –uh-labelled as registered sex offenders. That label is now placed ON them, by Ohio law and THAT will haunt them, for the rest of their lives.

there were Three … three Times, When… I was actually assaulted. And… … it’s also interesting that I n.. I d- didn’t.. iDentify these… Acts As assaults,, until many many many years later.

But Even at the Time, I remember being like, is that a thing? Oh maybe it’s a thing, like not Even Really Having Thought that it was an Issue that he, that someone, would Do something like that

To read or listen to the piece in full, email us at uksaysnomore@hestia.org.

We’d love to hear your thoughts on the episode or suggestions for future episodes – get in touch by emailing us at uksaysnomore@hestia.org.

Let’s stay connected – sign up to receive campaign news and updates, including upcoming events, new blogs and podcasts, and ways you can get involved in ending domestic abuse and sexual violence.