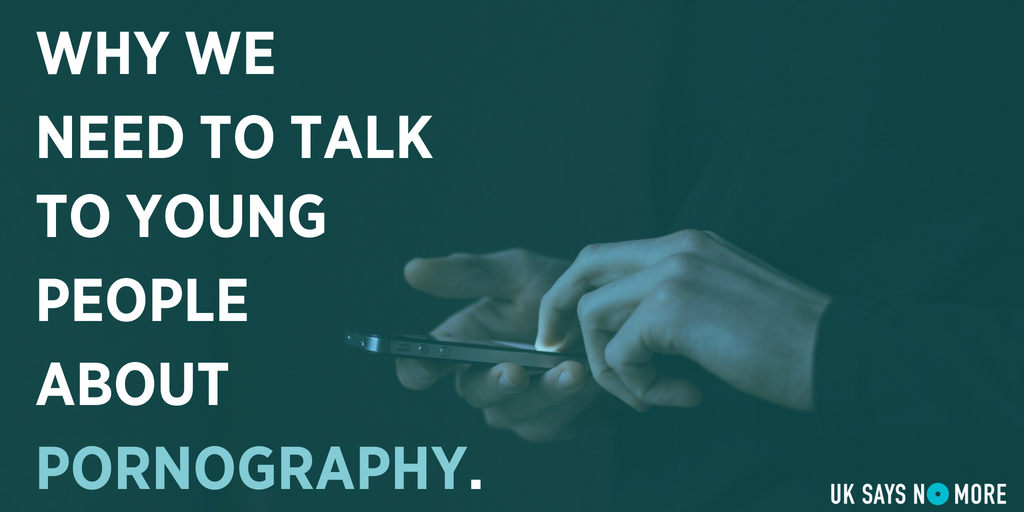 It’s no surprise that developments in technology have revolutionised the way we carry out almost every aspect of our daily lives. From the first email being sent in the 1970s, the introduction of the World Wide Web in 1991, and the first ever mobile phone with internet connectivity launching in 1996, we’ve come a long way. Hello, Google!

Much of the way we use technology is of course amazing and has enriched our lives for the better. We can stay connected, have access to a world of knowledge, and create totally new ways of doing things. However, the development of technology has also impacted upon our young people in one aspect more negatively than any other – the introduction of free, easily accessible online pornography.

The majority of teens and ‘tweens’ (those aged 9-12) own a smartphone and are using social media platforms such as Instagram and Snapchat on a daily basis. Especially if you are a parent, you’ll know this means your children ultimately have 24/7 access to billions of websites and social media accounts in the palm of their hands — including pornography.

In culture where smartphones keep this abundance of content constantly available to young people, and where social media has become intrinsic to many of their lives,  young people are growing up in a world inundated by selfies, where they feel a pressure to constantly share ‘life updates’ and images of themselves, and hence compare themselves to others.

Research by Hugues and Rosamund in 2015 suggests that young people who are heavy users of social media – spending more than two hours per day on social networking sites such as Facebook, Twitter or Instagram – are more likely to report poor mental health, including psychological distress (symptoms of anxiety and depression). 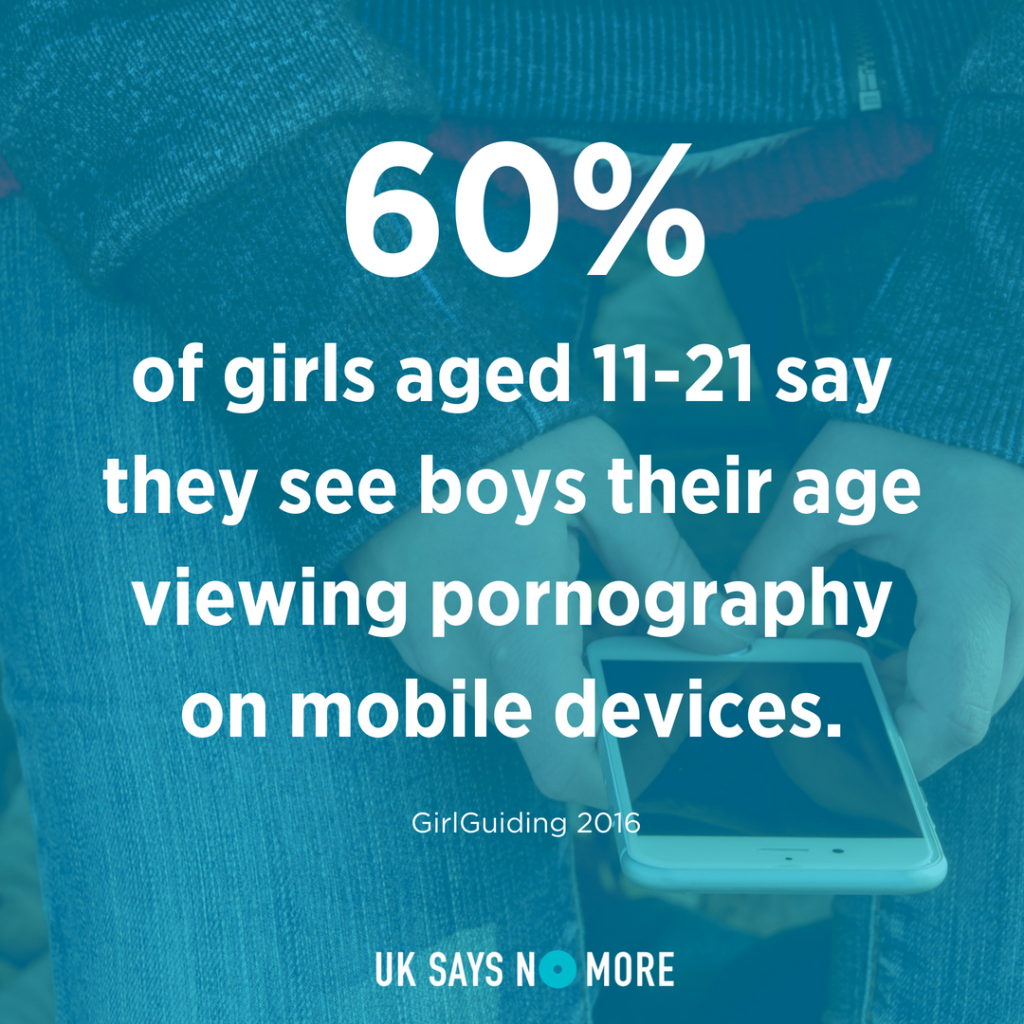 Free, online streaming of pornography is currently not regulated in the UK -meaning anyone can access one of the thousands of sites on the web – and with the development of smartphones, young people are seeing pornographic and sexually explicit content on their social media accounts.

The NSPCC found that children are as likely to stumble across pornography accidentally as they are to search for it or be shown it by someone else, while GirlGuiding found that 60% of girls aged 11-21 say that they see boys their age viewing pornography on mobile devices such as phones or tablets, often while at school.

Where are children learning about sex?

What this means is that their developing brains, particularly young boys who are the main viewers of pornography, are exposed to a plethora of unrealistic and in many cases increasingly violent content. In an analysis of over 300 scenes of pornography, one study found that almost 90% contained some form of physical aggression, predominantly by a man against a woman. Targets of this aggression showed pleasure or responded neutrally.

A report published by the National Union of Students (NUS) found that 60% of students surveyed use pornography to find out more about sex, with three quarters agreeing it provided unrealistic expectations. Young people, without formal education, are not able to understand the complexity of the pornography industry, and that the content they are seeing is not real, nor is it a lesson on what sex should look like.

GirlGuiding’s study found that 71% of girls aged 17-21 think that pornography gives out confusing messages about sexual consent, and the same amount think it makes aggressive behaviour towards women seem normal. This is extremely worrying, as it means many young women and men are growing up with a distorted idea about what they can expect when it comes to sex and intimacy. 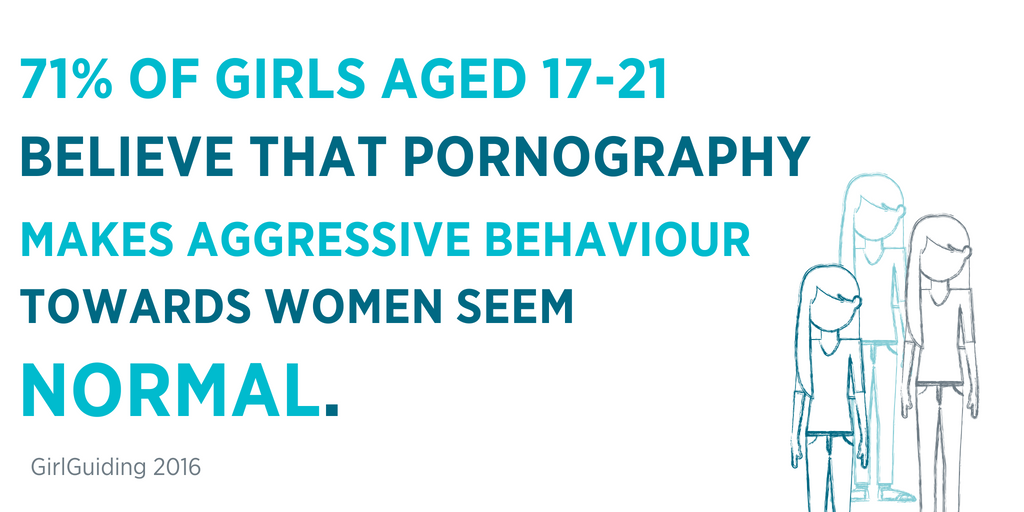 What needs to change?

We must call on the government to ensure that all children and young people receive a rounded, informative and empowering age-appropriate sex and relationship education (SRE) throughout their time at school and college. Currently, only pupils attending local-authority run secondary schools, which represent around a third of secondary schools, are offered sex and relationships education.

A revised SRE curriculum is not set to be introduced in schools now until September 2020, and parents are only obligated for their children to attend a limited part of the education, all other parts they can withdraw their children from.

We strongly believe that children and young people deserve, and require, a holistic education on issues around sexual consent, pornography, online safety, healthy relationships and domestic abuse; an education which does not only exist in schools, but in their families, communities, college, universities and beyond.

Parents are pivotal in this education, as they can give their children the information they need to understand the potentially harmful effects of pornography, social media and the internet.

By speaking openly with young people about the issues they may very well face, we can better support them to make educated, healthy decisions about their own lives and to take care of those around them – skills which will stay with them throughout their entire adult lives.

Let us know what you think.

Learn more about these issues at the links below, and let us know what you think about the topics raised by tweeting us @UKSAYSNOMORE.

nspcc.org.uk/preventing-abuse/keeping-children-safe/online-porn > a resource including tips for how to speak to you children about pornography

net-aware.org.uk > a guide to social networks children use

childnet.com > an organisation working to make the internet a great and safe place for children

Why we need to talk to young people about pornography.
Tagged on: parents    pornography    Technology    Young People