In the height of UK SAYS NO MORE week, we held our Rally in Parliament where we took a stand against domestic abuse!

The event focused on the impacts of domestic abuse on children’s lives and the importance of their inclusion in the new Domestic Abuse Bill to ensure they receive the vital support they need in order to holistically recover from their trauma.

To acknowledge and gather support for our proposal, we asked parliamentarians to attend our rally in the Portcullis House. We had significant representation from MPs and our various partner organisations and would like to thank everyone for joining us!

We were delighted to hear from several champions, including Carolyn Harris (MP) as well as Dr Karl Broome from Stay Safe Global who compellingly argued for the case around including children in the new Domestic Abuse Bill. 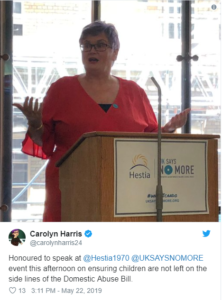 Carolyn Harris urged that we remember to protect our children’s rights through understanding their role in domestic abuse, and how they are often the silent victims. As a result, she focused on the importance of safeguarding children, through keeping them at the heart of the Domestic Abuse Bill. 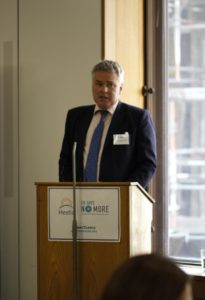 Tim Loughton spoke about the importance of breaking the cycle of abuse through early intervention. 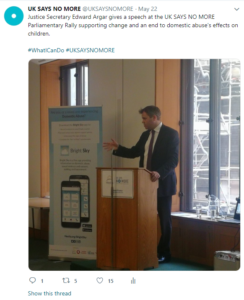 Edward Argar, Justice Minister, honoured us with an impromptu speech, echoing previous speakers through the recognition of the cycle of abuse and stated that “the Domestic Abuse Bill is a monumental piece of legislation and we must act now to support children.”

*Michelle, survivor of coercive control and physical abuse, shared her personal experience of living with a partner who abused both her and her child. As a result, this affected her son’s ability to perform well in school and he was subsequently diagnosed with Complex Trauma. 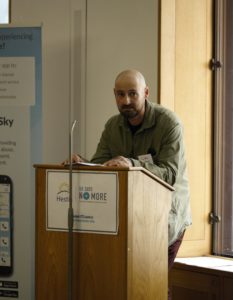 Dr Karl Broome shared his own childhood experience of living with domestic abuse, growing up without any interventions or support in place. With a lack of services, Karl discussed how we can engage men in ending domestic abuse and sexual violence. We are proud to have Karl co-host our new podcast outlining the role of men in domestic abuse. 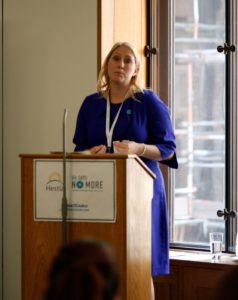 Finally, Lyndsey Dearlove, Head of UKSAYSNOMORE, reminded us of our responsibility to ensure specialist support is available for children experiencing domestic abuse in the home and for those living in refuges to enable them to recover and move forward to have healthy relationships free from abuse.

From hearing survivors relay their poignant stories to champions repeating our statistical evidence, we urge MPs and members of the general public to take a stand against domestic abuse and continued support for children.

On the side, MPs showed their support through wearing our UK SAYS NO MORE pin, and taking a photograph at our photobooth alongside our banners and teddy bears. In light of supporting children who have endured domestic abuse, we presented several case studies and voice notes that were incorporated into our eight teddy bears. They were positioned around the event for attendees to hold and listen to the recordings of children’s stories (recorded by child actors). This was a way for the voices of children to be heard. As part of our forthcoming teddy tour, we invited MPs to write a special note of support and encouragement to children housed in refuges.

Why is this relevant and what does our evidence show us?

As our commissioned research by Pro Bono Economics suggests, the number of children in the UK who have witnessed severe domestic violence in their lifetime amount to 500,000 children. Additionally, it is indicated that exposure to violence could potentially increase the number of children with behavioural disorders by 35,000 to 100,000.

UK SAYS NO MORE Call to Action: Where we are at now

Our Rally last year called attention to the need for an increased understanding and focus on the impact of domestic abuse on children, and the need for prevention and early intervention to be at the heart of the Domestic Abuse Bill.

Through our understanding and knowledge around the ill effects of domestic abuse on children, UK SAYS NO MORE issued a Charter on Prevention in April last year. In May 2018, this was welcomed and supported by over 135 MPs and Lords.

Since, we submitted evidence to both the Joint Home Affairs Committee and the Joint Human Rights Committee. Additionally, Pro Bono Economics conducted research and published a report entitled ‘On the Sidelines: The Economic and Personal Cost of Childhood Exposure to Domestic Violence’.

In April this year, we were glad to provide evidence to the Pre-Legislative Committee.

Thus, our Parliamentary Rally this year welcomed MPs whose increasing support is vital for raising awareness of domestic abuse and sexual violence. Harnessing their support, we hope to work together to ensure the needs of children are enshrined and secured in law.

With thanks to our Parliamentary Champions:

The Rt Revd the Lord Bishop of Coventry​

A Day in the Life of UKSNM: Parliamentary Version
Tagged on: Champions    Parliament    Rally    UK SAYS NO MORE Week