In line with the start of Sexual Violence Awareness week 2020, contributor to UK SAYS NO MORE, Simran Dhillon, details the fall in rape convictions. Read on to learn the data, reports and the response to this fall:

Figures released from a report conducted by the Mayor’s Office for Policing And Crime (MOPAC) in July 2019, reveal high levels of concern around the decline in the rate of rape prosecution. As part of this study, 501 allegations of rape made in April 2016 were reviewed. The key findings of this report were: 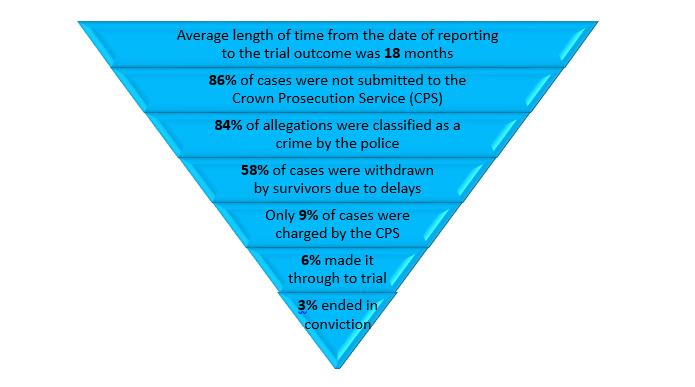 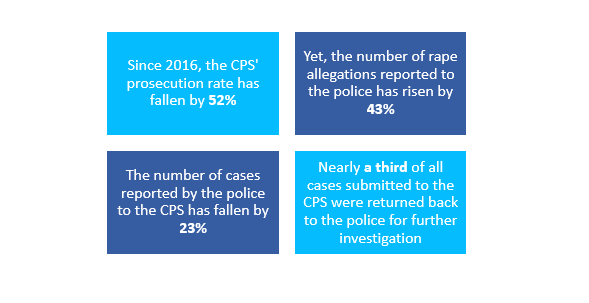 A More Detailed Look into the HMCPSI Report

The opening line of the HM investigation, from HMCP Chief Inspector Kevin McGinty, states, “If 58,657 allegations of rape were made in the year ending March 2019 but only 1,925 successful prosecutions for the offence followed, something must be wrong.” Amid allegations of the CPS adopting a risk averse approach, women’s groups were anticipating the CPS to take responsibility for the declining rate and make effective changes to the system to revert these disappointing results. The investigation explored three main reasons for the decline in rape prosecution but did not offer concrete answers.

First, they highlight that the CPS has been charging fewer cases, but the report insists there is no evidence of the CPS unfairly refusing a charge. Instead, we read that the number of cases being reported from the police to the CPS has fallen from 6,611 in the year ending March 2017 to 5,114 in the year ending March 2019 – a 22.6% decrease. The focus is placed upon the shortcoming within the police force with little being said about the CPS.

Second, the report investigates the delays that many cases experience. The causes for the delays were cited as:

·         Lead officers on leave meaning cases could not be worked on

·         Incomplete case files submitted to the CPS from the police

The last factor mentioned above is cited as a significant cause of delay, as the police submit incomplete files to the CPS, which are returned to the police for further information. This cycle continues until the file is deemed complete and accepted for review by the CPS. However, the ability for the police to complete these files in a timely manner is hindered by waiting for results from forensics or “for a suspect to be located and arrested or extradited”. These delays can cause survivors to withdraw support from the case due to the stress and trauma they experience from the length it takes for their case to proceed.

Third, the HMCPSI looked into whether the CPS is risk averse, given the allegation made in 2018 that the CPS were allegedly charging easy cases and filtering out ‘weak cases’ to improve the conviction rate. This accusation suggested that the Code for Crown Prosecutors (a public document that sets out how to judge whether a case has enough evidence against the defendant to bring a case to trial) was not being used appropriately. However, HMCPSI concluded that this was not the case and they demonstrated how the Codes test had a failure rate of 10% in 2016 but in this report, the failure rate had dropped to 2%. The number of cases not sent to trial by the CPS fell by 12.5% between 2017-2019 and a further 1.3% between 2018-2019.

A report published by Centre of Women’s Justice highlights women’s groups disappointment and frustration with the report. The Director of the End Violence Against Women (EVAW) coalition said:

“The report is profoundly disappointing in many ways. It recognises that the statistics – on many thousands of rape allegations and prosecutions – alone raise huge questions about justice being done, but it insists there is quality CPS decision making. At the same time the report refers to its own survey of CPS managers saying their units are not well staffed.”

Harriet Wistrich, the Director of the Centre for Women’s Justice said:

“We share EVAW’s concerns about the lack of independence of this review and are most concerned that in spite of the overwhelming evidence of a dramatic decline in the prosecution of rape, there is insufficient inquiry into the cause of it. We are inundated with examples of compelling cases of rape prosecutions being dropped by the CPS or by the police who say there is no point in referring consent cases to the CPS anymore. Altogether a wasted opportunity to shine a light on this crisis.”

This resounding disappointment led to a coalition of women’s groups submitting legal proceedings against the CPS for changing its approach to assessing rape cases, which has resulted in the severe drop in the conviction rate.

Everyone who is around that victim has an intricate part to play in his or her recovery. The more we understand the practical purpose behind #WhatICanDo to believe, respond and refer victims to specialist support, the more effective we become in supporting society as a whole.

We want to see a change for all victims of rape and see a disruption in the societal narrative. We need to ensure that society puts victims first and to be confident in our criminal justice system.