On the eve of World Mental Health Day, in a corner of London’s East End, UK SAYS NO MORE sat down with renowned actress and activist Rose McGowan for an intimate conversation on the past histories and present-day hopes on tackling sexual violence in our society. With our blue and white lighting and our bespoke #WhatICanDo and Consent on the Beach cocktails, we had created a safe space without filming to allow for free-flowing conversation. Read on to find out more about what happened on this amazing night. 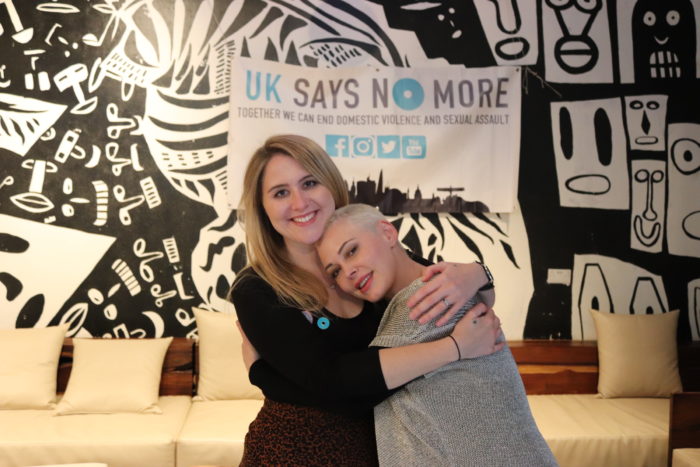 UK SAYS NO MORE Partnerships Manager Sarah D’Angelis, took to the stage to introduce Rose and set the scene, bringing us back to the flashbulb moment of when we started to see the uprising of the #MeToo movement. Sexual violence is an area easily misunderstood and sensationalised in mainstream media. In addition, those who speak out are maligned and questioned. As the event began, it was clear that Sarah and Rose intended to break these barriers. They spoke openly in front of a dedicated audience of survivors and allies who wanted and needed to hear change.

The movement of #MeToo started with Tarana Burke. Whilst popularity grew with Hollywood stars such as Rose McGowan, the strength of the hashtag led to an outpouring on social media from millions throughout the world. This shattered the societal expectation to keep quiet about sexual violence.

With the purpose of changing the narrative and shutting out the noise of societal thinking, Rose put common terminology used to describe sexual violence to task, challenging common phrases such as “sex scandal” and “sex crimes” which, in themselves, bring their own complications:

“I don’t think the words we have are good enough. I don’t like the term ’sexual crime’. It’s not sex, it’s abuse of power, it’s theft.” – Rose 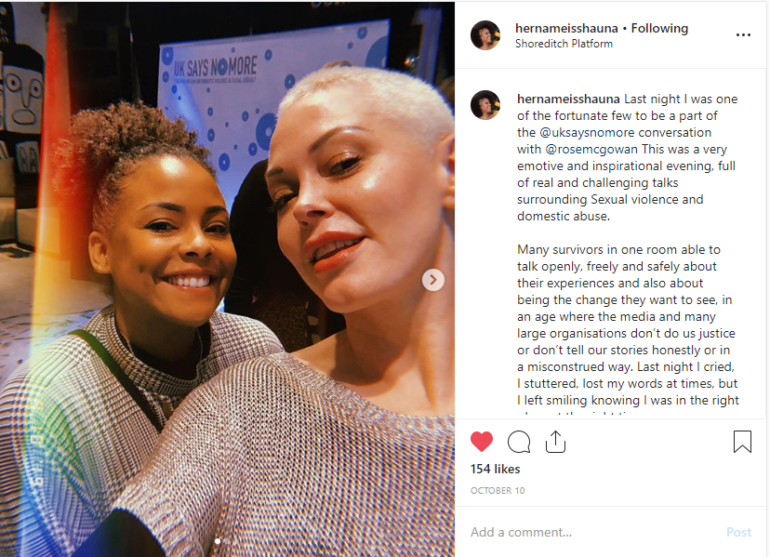 Being on the receiving end of an abuse of power is something Rose knows all too well. As an actress in Hollywood and a star of an international hit television show, she has worked with powerful people. Some in the industry  have used their power to elicit violence or have walked away from challenge others.

“When I was in Hollywood I was marketed as a sex symbol. It keeps you isolated. Men think they can touch you and women don’t like you.” – Rose

Hollywood effortlessly appears as a beacon of prosperity bringing people in like moths to a flame, blinding society to its misgivings and allowing sexual violence to be attributed to merely another cog in its wheel. Sarah was keen to understand more about Hollywood’s true culture. She asked whether what we see on screen is comparable to what really goes on behind the scenes. Rose’s response told us all to look behind the shiny, polished veneer:

“The reality is what goes on behind the scenes goes on the screen then goes into the world… it’s still completely unequal… watch and look for what they’re telling you. Look at how they’re portraying women, and next time, think before you buy a ticket.” – Rose 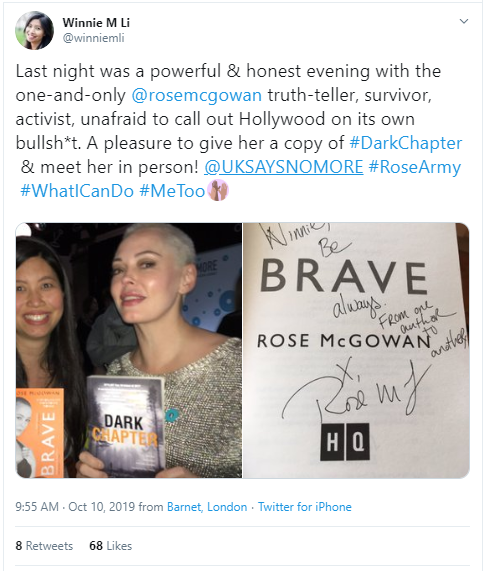 “It sucks when you’re a survivor that you have to go that extra mile, it’s not fair… but if not you, whom?” – Rose

As an identifiable figurehead in the #MeToo movement and outspoken on the topic of sexual violence, Rose has been an easy target for trolls. She noted the unashamed cruelty over the internet and the lack of compassion for those who speak out against abuse and violence. What was evident from the conversation, and in society, is the narrow acceptance for what a female victim of abuse looks like. The truth is, anyone can experience violence, and the trauma thereafter is unpredictable. 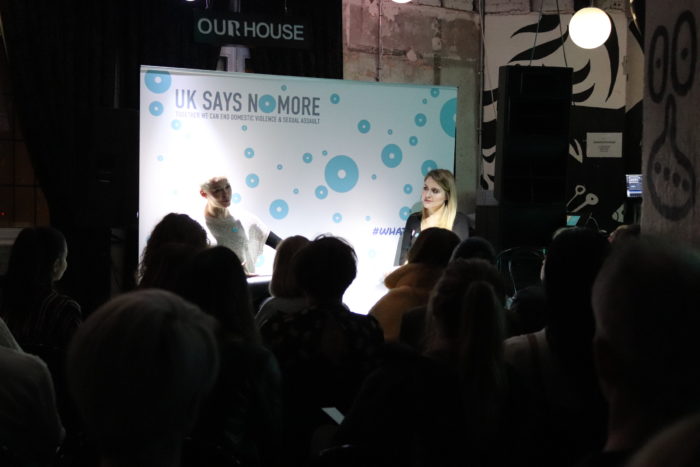 “I think we all need to be gentler with each other, especially with people who have endured trauma. I don’t think people understand trauma as much as they should.” – Rose

Sarah read a survivors account to the audience, detailing the difficulty in disclosing and reporting an incident of rape. The fear, broken trust and guilt that arose from the account prevailed and had the audience wondering what they would do if they, or someone they know, were in a similar situation.

“Every bystander is accountable” – Rose

We all have a role to play in enabling survivors to speak up and to educate ourselves on the tools used to support them. Whether that is signposting to support services or challenging stereotypes and jokes. Rose noted to allies that choosing to disclose an incident of sexual violence is up to each individual survivor. She added that so much of their agency has already been taken from them and they will need to have the strength and perseverance to tackle this issue head on and that the ally will also need this to support them through.

“We have to remember it’s the rapists’ fault. It’s their fault. Just letting someone know that if it’s something they want to choose to share slowly or quickly that you’ll go on the journey with them.” – Rose 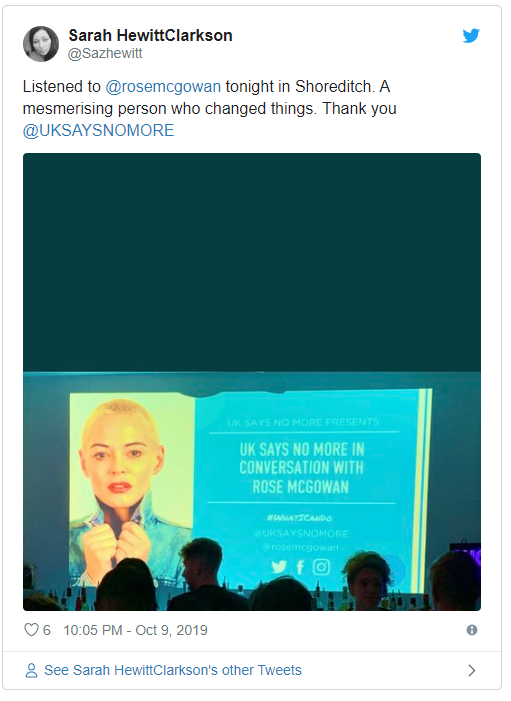 Thank you very much for the opportunity to hear Rose McGowan in the tonight’s event. It’s going to have a ripple effect in my life and in those who are around me. This is important. – Attendee 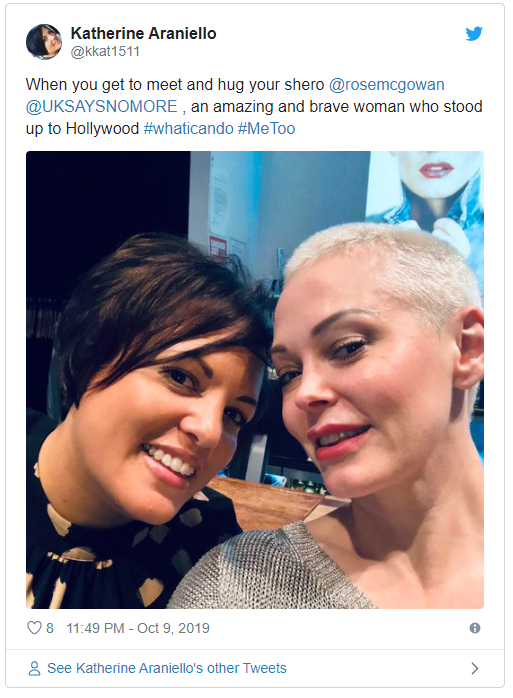 UK SAYS NO MORE designed the event to be a safe space where the audience could respond and connect and we couldn’t have asked for a better night. We would like to thank Rose and everyone who came and for those who couldn’t make it, we hope to see you at a future event. Together we can push the knowledge of #WhatICanDo to amp up the voices of survivors and allies so that we will never be ignored.