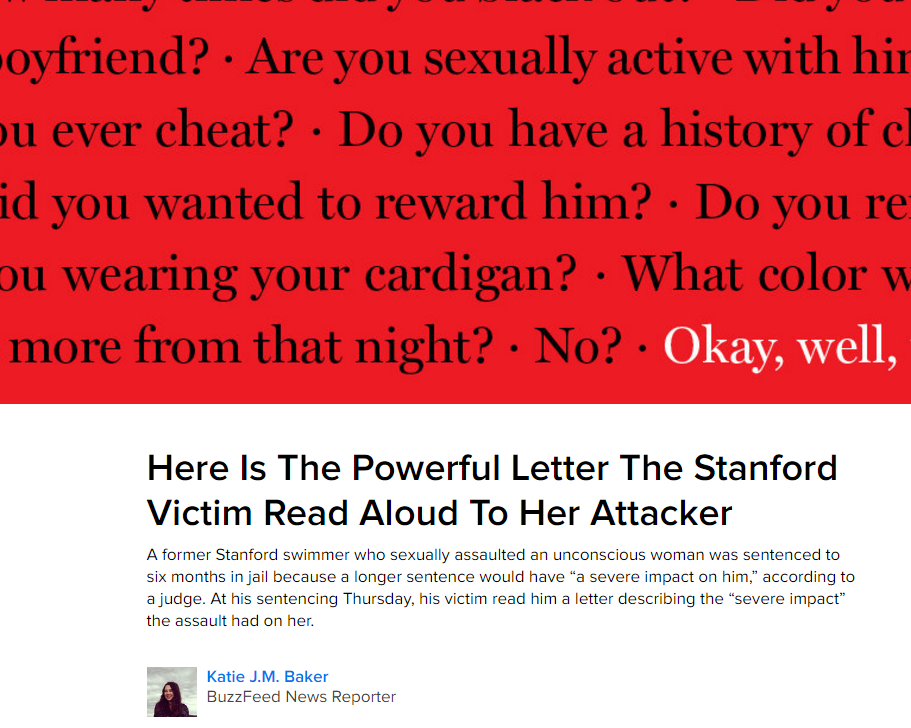 On our minds at UK SAYS NO MORE during the last few weeks has been the hugely powerful letter written by a survivor of rape, read aloud in court to her attacker, 20-year-old Stanford student Brock Turner.

The letter has been hugely circulated since being published by Buzzfeed News reporter Katie Baker, and has brought about a huge wave of vital conversation about rape, consent, blame, and responsibility.

The anonymous woman details her horrifying experience, and the reactions and responses given by the attacker himself, and to those involved in the court trial.

No More “But he was drunk…”

Turner’s childhood friend, Leslie Rasmussen, contributed to the conversation during Turner’s sentencing by defending his actions in a character statement, asserting that “These are idiot boys and girls having too much to drink and not being aware of their surroundings and having clouded judgement”.

Rasmussen’s words (for which she has since apologised for, highlight an issue faced by many when coming forward about domestic violence and sexual assault – victim blaming.

Read the immensely powerful letter a survivor read to her attacker in court: https://t.co/44tBgejAIl #NoMoreExcuses #UKSAYSNOMORE

By putting the blame on “having too much to drink”, the blame is taken away from Turner himself, and implies that the assault occurred because the victim herself was drunk, and so therefore somehow, this was her fault; and because Turner himself was drunk, that this isn’t a reflection of his true character – only how he acts when he is not “completely in control of his emotions.”

The Judge in this case, Judge Persky, is quoted as saying that a longer prison sentence (than the 6 months Turner has been sentenced to) would “have a severe impact” on Turner, who at the time was a Stanford student and aspiring Olympic swimmer.

He also in his sentencing explained his decision to take Turner’s intoxication into account by saying: “…some weight should be given to the fact that a defendant who is, albeit voluntarily, intoxicated versus a defendant who commits an assault with intent to commit rape, a completely sober defendant, there is less moral culpability attached to the defendant who is legally intoxicated.”

No More “She was asking for it”

In the young woman’s letter, she makes reference to Brock Turner’s statements during the trial, where he put blame on her intoxication and even suggested that she in fact had consented to sex. To quote her letter: “To listen to your attorney attempt to paint a picture of me, the face of girls gone wild, as if somehow that would make it so that I had this coming for me.”

“I was pummelled with narrowed, pointed questions that dissected my personal life, love life, past life, family life, inane questions, accumulating trivial details to try and find an excuse for this guy who had me half naked before even bothering to ask for my name. “

An excerpt of Turner’s own statement was published by The Guardian, in which he pushes the blame for his actions on “drinking and making poor decisions while doing so.”  He also makes mention of the “college lifestyle” and of drinking heavily and “sexual promiscuity”.

NO MORE “He was drunk…” Alcohol consumption is not to blame for rape.

NO MORE “He was drunk…” Alcohol consumption is not to blame for rape. https://t.co/62mPWfCdSN #NoMoreExcuses #UKSAYSNOMORE

No More “They didn’t mean it”

The idea that alcohol in any way excuses or causes any form of sexual assault is of course incomprehensible. Brock Turner’s attitude that his “poor decisions” were caused by drinking alcohol is simply unacceptable. Rape doesn’t happen because you are drunk. Rape happens because you choose to rape.

“Regretting drinking is not the same as regretting sexual assault. We were both drunk, the difference is I did not take off your pants and underwear, touch you inappropriately, and run away. That’s the difference.”

After prosecutors recommended a sentence of 6 years, Turner himself has been sentenced to a mere 6 months imprisonment, and it has been reported he will likely get out in 3. The judge has been condemned for his ruling, and Stanford University students protested at their graduation in response to Turner’s short sentence, which has been described as “a slap on the wrist”.

Judge Persky has since been removed from another case of sexual assault to which he was assigned, and a group pushing for him to be recalled have gained 1.2 million online signatures and have raised $900,000.

We at UK SAYS NO MORE stand together with the Stanford rape survivor, and survivors everywhere, and pledge to tackle the victim blaming which exists in our culture.

When having conversations around these issues with friends, colleagues, or family, we must all make it clear that there are NO excuses for any form of sexual assault. There is no one else to blame, but the attacker.

Take the pledge to stand against Domestic Violence and Sexual Assault. Together we can raise awareness, start conversations and make real change.

Join UK SAYS NO MORE Learn About These Issues Get Help