I lost my mum to an abusive relationship recently, she took her own life. I can’t really describe how that feels. A huge part of me is now missing, so many loose ends I can’t pull together. The relationship we had wasn’t always perfect, we had communication problems, I was the one at fault.

After my mum left my dad, she got into two abusive relationships, she escaped one but not the later one.  I couldn’t understand why my mum stayed with a man who abused her, controlled her life, forced her into being homeless and tried to turn her against her own family.

Every conversation felt the same, an endless cycle of my mum asking why I wouldn’t accept her partner, why I wasn’t in a relationship and why we didn’t see each other that often. I couldn’t answer her, I had no words to describe how I felt. I felt powerless, useless unable to do anything to fix our situation. I couldn’t save her from this man.

After I shared my story on social media I received many different responses. Most people are congratulating me on my bravery or honesty, others give their condolences due to the loss. I am so thankful for those people, it means a lot to hear that people care. The thing that struck me most was that after sharing my story many of my friends started to share with me their own experiences. I have been under no illusion that domestic abuse, rape and violence happens but what I did not know was just how many people I know have experienced it and have not been able to speak out.

“If we were to educate young boys and girls about abuse perhaps young men and women wouldn’t become abusers, would not be abused.”

A woman I went to school with came forward and told me that she had been abused from the age of 14 onwards. I knew her, we were in classes together. I had no idea that anything was going on. I have friends who have come forward and told me that they have been raped, that their peers denied it happened, even sided with the person who raped them. So many voices that needed to be heard and weren’t.

Whilst there is a rise in activism against domestic violence and abuse still so many people fall by the wayside. I feel this is due to our education system. Through school I don’t think we ever touched the subject of domestic abuse. I remember talking about smoking, drinking and drugs but never did we speak about what happens behind closed doors. If we were to educate young boys and girls about abuse perhaps young men and women wouldn’t become abusers, would not be abused. These conversations could also help students who may be experiencing abuse identify it, even come forward and seek help. Until I lost my mum I had no idea that there were support networks for abuse victims. If I were asked three years ago, where someone should go for support I wouldn’t have been able to answer. This lack of knowledge needs to change.

Taking part in the Hestia and NFL Peer Ambassador programme I have been able help educate around 200 young men and women about domestic abuse. The younger participants in the camp came forward after the sessions and thanked us for the talk saying that they hadn’t really thought about the topic. This really struck home;  such a huge topic that is poorly understood by most, and hasn’t even entered the mind of young teenagers.

How will society change if we do not educate the generations to come about topics that truly matter? 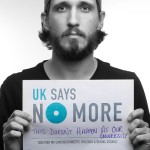 Jordan is one of the NFL’s DVSA (Domestic Violence & Sexual Assault) Peer Ambassadors. Jordon completed his degree in the classics in the Summer and is currently working in his home town of Swindon. He has not only supported the UK SAYS NO MORE movement by taking part in the delivery of DVSA training, but has also taken part in the UK SAYS NO MORE print ad campaign and a promotional video which has yet to be released.

Read more about the NFL Peer Ambassador Programme, created in collaboration between Hestia | UK SAYS NO MORE and NFL UK. You can also see and share the campaign print ads.