In my 13 year career history, I have been fortunate enough to have worked with some incredible people who have shaped my views on knowledge on domestic abuse and sexual violence. From my time volunteering in a Community Intervention Centre in my home town of Cape Town, South Africa to working as the manager of the Harrow and Ealing Domestic Abuse Outreach Service and as a Multi-Agency Risk Assessment Conference (MARAC) Coordinator, this was a welcome change to delivering to a number of male students talking about issues revolving around issues relating to domestic abuse and sexual violence. My position as Violence Against Women and Girls (VAWG) Partnership Manager for Hestia allowed me to explore this avenue working alongside the NFL. 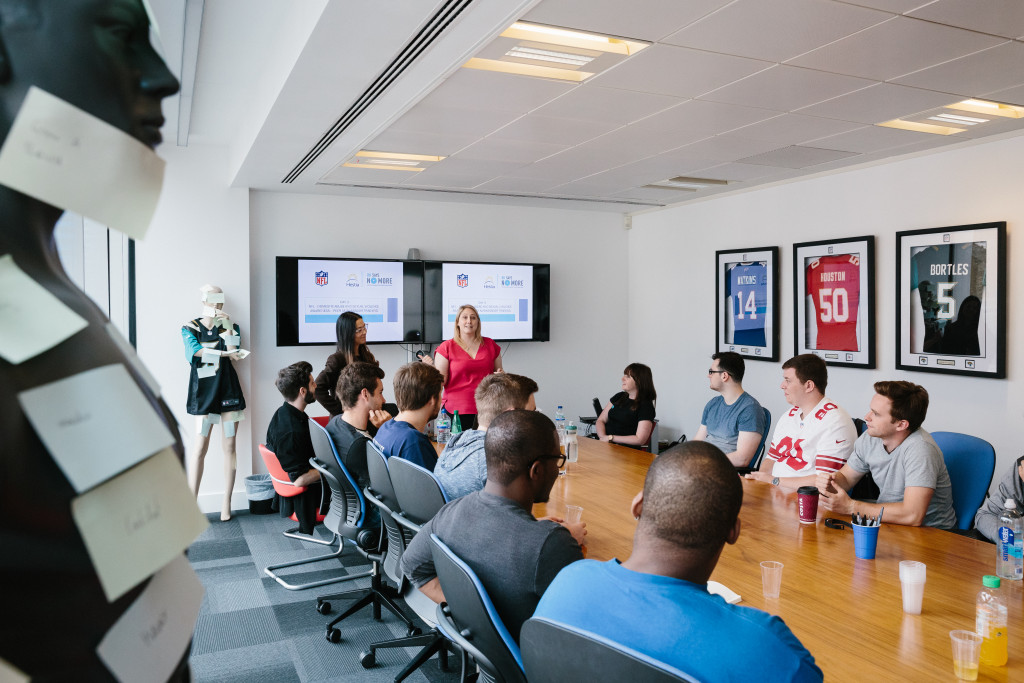 The NFL (America’s National Football League) is an official partner of the UK SAYS NO MORE campaign, and the NO MORE campaign in the United States. The NFL are committed to working with its coaches, players, university teams, secondary school teams and young players to embed a culture of gender equality and to raise awareness around domestic abuse and sexual violence.

The NFL has a strong British and European fan base with a number of European athletes playing in the NFL: Moritz Boehringer – Minnesota Vikings, Anthony Dablé – New York Giants and Efe Obada – Atlanta Falcons.

Together they are taking the UK SAYS NO MORE ‘Excuses’ Pledge and taking a stand against domestic abuse and sexual violence.

Each year the NFL London hosts a summer training camp for players aged 16 to 30 from universities and clubs across the United Kingdom to highlight the importance of respect, integrity, responsibility to team and resiliency. This year Hestia|UK SAYS NO MORE were asked to deliver Domestic Abuse and Sexual Violence training at their summer camp in Royal Holloway.

This was an incredible challenge for me as this was an opportunity to utilise the last 13 years of my career, working with both male and female victims of domestic abuse to create an engaging, impactful and invigorating programme. It was a challenge I was more than ready to accept.

First and most importantly, the UK SAYS NO MORE Team and I are eternally grateful to Jess Boyd – Head of Gender and Community Involvement for the NFL for cementing an incredible bond between the campaign and the NFL. Jess and I started by talking to the young men who had attended the training camp the previous year to gain their feedback and what they  suggested  to us was simple, talk with us about this topic and not at us like we are all potential perpetrators – we want to be part of the solution.  This was not the first time I’d heard this comment from men but the first time I had the opportunity to do things differently.

Jess and I began developing an NFL and UK SAYS NO MORE Peer Ambassador Programme, where student players from across the UK would attend my training. They would need recommendations from their coaches and universities before being interviewed by Jess. It would be no easy feat as 150 young boys and men were expected to attend the camp, but also enable the ambassadors to return to their universities and clubs and confidently discuss all the issues and statistics that I would share with them. My goal was to create a programme with a clear message that domestic abuse and sexual violence is not acceptable, and that we all have a responsibility to end it. 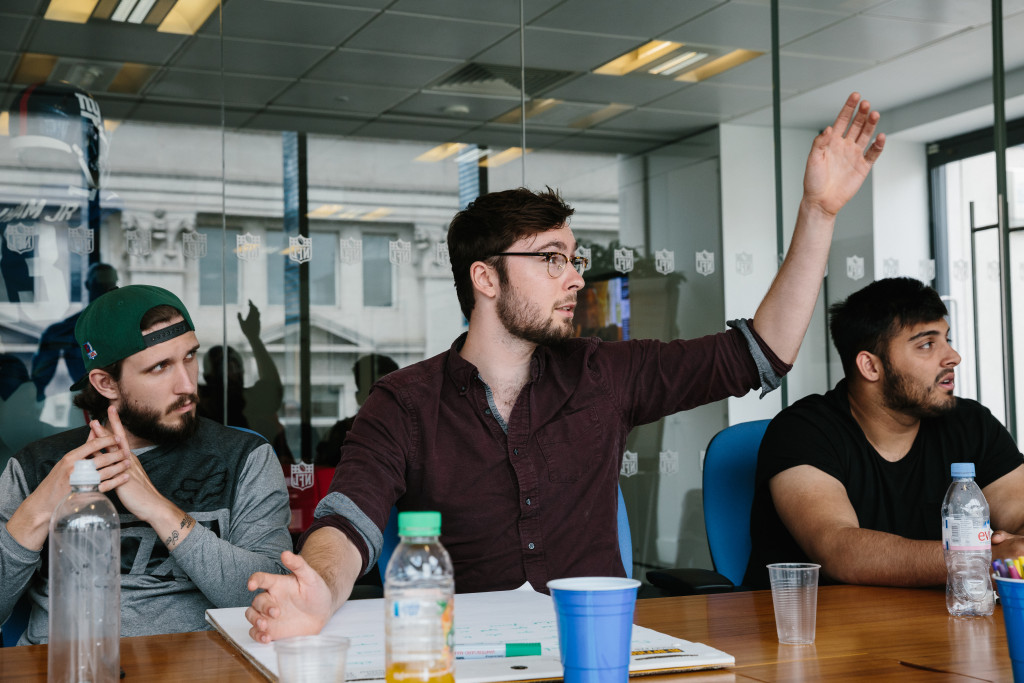 Once the ambassadors had been selected, they were invited to the London NFL office to spend two and a half days together with myself and Jess along with Lisa Friel – Senior Vice President, Special Council for Investigations NFL. We discussed the various gender expectations, stereotypes, and challenged what it means to be a man. To accompany the training I presented an extraordinary documentary entitled ‘The Mask I Live In’ which explores masculine identities before discussing Tony Porter’s concept of The Man Box.

The Man Box concept is an understanding that in society men have been defined by certain characteristics that men must uphold to be accepted: physical strength, protectiveness, being financially successful and having had many sexual conquests.

These concepts lead us to understanding that young men and boys are growing up in a society that praises and attributes value to being sexually promiscuous and dominant over another person – we see this message perpetuated daily through music videos, computer games, film and television. The greater impact of this messaging and forcing young men and boys into the Man Box is that we are discouraging young men to talk about how they feel, show emotions and ask for help.

‘Figures collated by the Campaign against Living Miserably (Calm) show there were 4,623 male suicides in the UK in 2014, the second highest number in 15 years and the equivalent of 12 deaths a day’.

I made clear that my training had the following key principals:

‘In the time since we’ve been talking about this, 11 people have been raped but with only 15% of rapes reported, the actual number is terrifying’. 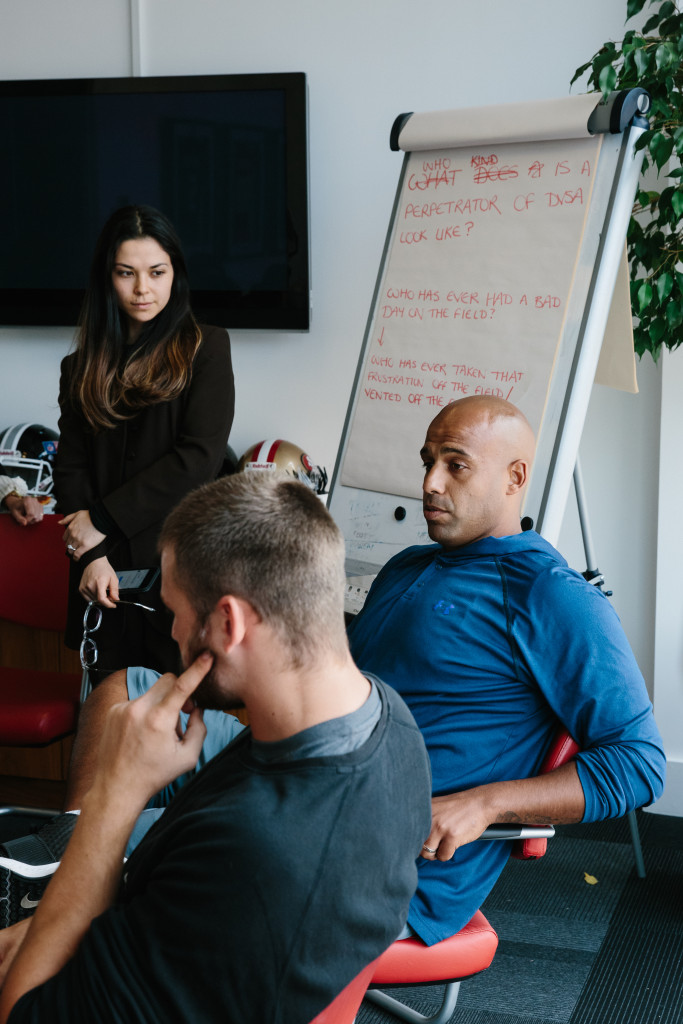 Following on the representation of male stereotypes in the media, the Ambassadors really enjoyed exploring the impact of advertising. More importantly the influence of words used to describe sex and our genitalia can vary from recipients. When I asked the ambassadors to call out words they use or know of, in relation to describing sex or genitalia, they quickly realised that the examples had violent connotations. The ambassadors now understood the impact these words can have on another person – both male and female – when used and how the force of the words can be objectifying.

The final task of the day was to watch the Thames Valley’s Police’s Consent Video. It highlights the importance of consent and the power of ‘no means no’. The Ambassador’s unanimously agreed the video was extremely patronising, however the ambassadors declared:

‘There are still many people who do not understand the concept of consent, and they are the people who need to see this video’

As a response, the Ambassadors geared the conversation to discuss the fear of being falsely accused of sexual violence and how a false accusation would destroy their lives. An ambassador shared that one of their greatest fears involved being drunk and going home with a woman, who is also drunk, and in the morning when they both wake up – being accused of rape.

Lisa Friel stepped in and offered a simple ‘test’; this is the same test she offers the NFL football players when she is delivering domestic abuse and sexual violence awareness sessions to university players in the US and the NFL league team players.

The morning of Day 2 was spent exploring the many areas of domestic abuse and we started by understanding – what is abuse, the different forms of abuse and why people stay within an abusive relationship. Many of the ambassadors began to understand how victims of abuse may feel. They also began to feel more comfortable discussing the issue, and how they would approach the situation if a friend or family member asked them for help.

We then moved on to the subject of male privilege, as you cannot discuss domestic abuse without understanding how gender inequality has an impact on  domestic abuse and sexual violence for both male and female victims. 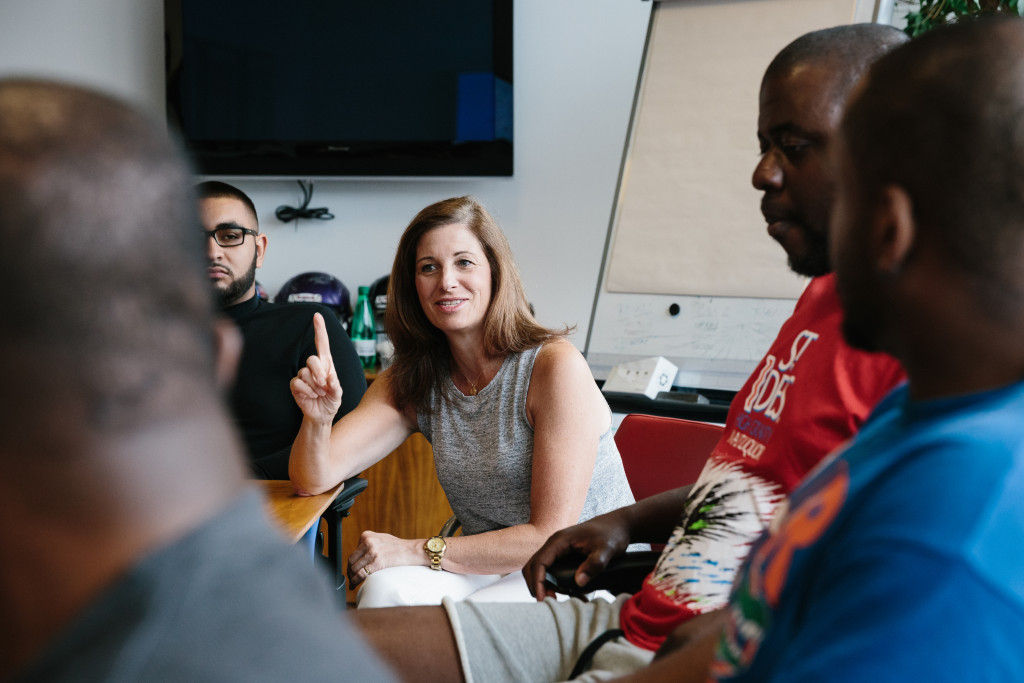 ‘The training has made me more interested in learning about male privilege, (which exists, no matter how much a room of men disagree)’ – Ambassador Feedback.

I ended Day 2 looking at what is a healthy relationship, what is controlling behaviour and how to support a victim of domestic abuse or sexual violence. I presented the ambassadors with a new smartphone application that is currently in development by Hestia and Newton Consultancy called Bright Sky. It is a free resource that directs users to their nearest specialist service wherever you are.

Believe them; listen without judgement and signpost to support using the Bright Sky App.

Day 3 was spent working with the ambassadors to create the material for the NFL Summer Camp DASV awareness sessions, and the ambassadors themselves – taking their UK SAYS NO MORE ‘Excuses’ Pledge.

Following this experience – I strongly believe that the only way we can put an end to domestic abuse and sexual violence is by including the male population in the solution – let’s start the conversation about DVSA with boys, young men and men.

This is why the UK SAYS NO MORE campaign is unique – it truly relies on the power of the individual to endorse, promote and take a stand against DASV.

Over  the three days the ambassadors and I spent together I saw them each endorse, promote and take a stand against DASV through their involvement on the course and as a camp ambassador – they shared their own and their friends experiences of intimate partner violence, their experiences of witnessing abuse as children and finally their anger, frustration and at times helplessness when it comes to how they can stop DVSA.

The process of organising this programme was challenging, but I learnt that young men are definitely committed to being a part of the solution.

We’re so excited to launch the below NFL print ads, taken in collaboration with our Peer Ambassadors at NFL. View and download all the images here.

Check out this blog piece from Reminis Studios about the experience of photographing the UK SAYS NO MORE & NFL print ad campaign.

Interested in becoming a partner of UK SAYS NO MORE?

Please get in touch with Lyndsey Dearlove, VAWG Partnership Manager, by email at Lyndsey.Dearlove@hestia.org or by phone at 020 7378 3170.

If you are worried about yourself or somebody else, visit the Get Help page to find an appropriate support service. as always, if you find yourself in immediate danger, call 999.

How to Engage Men in the Prevention of Domestic Abuse and Sexual Violence
Tagged on: Ambassadors    Hestia    men    NFL    Prevention    Training