Often, perpetrators of domestic abuse and sexual violence are painted as strangers, as monsters. We know of their existence, yet many of us feel fortunate to not know them personally. Unfortunately, this picture is flawed, and can lead to us distancing ourselves from perpetrators, and therefore the issues of domestic abuse and sexual violence all together.

The reality is, each and every one of us is affected. With 1.9 million adults experiencing domestic abuse and around 100,000 adults being raped in England and Wales alone every single year, it’s almost certain that we’ll know someone affected by these issues in our lifetime. Therefore, it’s very possible that we’ll all know a perpetrator of these crimes, too.

We must take action in all areas, in every industry, in every public space – from Hollywood to Haringey, from Politics to Pinner…

The Queen’s Head pub in Pinner is the latest partner to join the campaign.

The Queen’s Head is a family owned pub in Pinner, which is a North West London suburb. The pub has a long history dating back to the 11th century, and sits at the heart of the community in all that it does.

In order to make a change in our local area, we display information on Hestia’s Bright Sky app in all of our public areas, in the hope that victims of domestic abuse are able to download the app and seek support. All of our staff are trained in looking for potential victims of violence, modern slavery, psychological abuse and self-harm. We also run the ‘Ask Angela’ campaign alongside promoting the Bright Sky app. 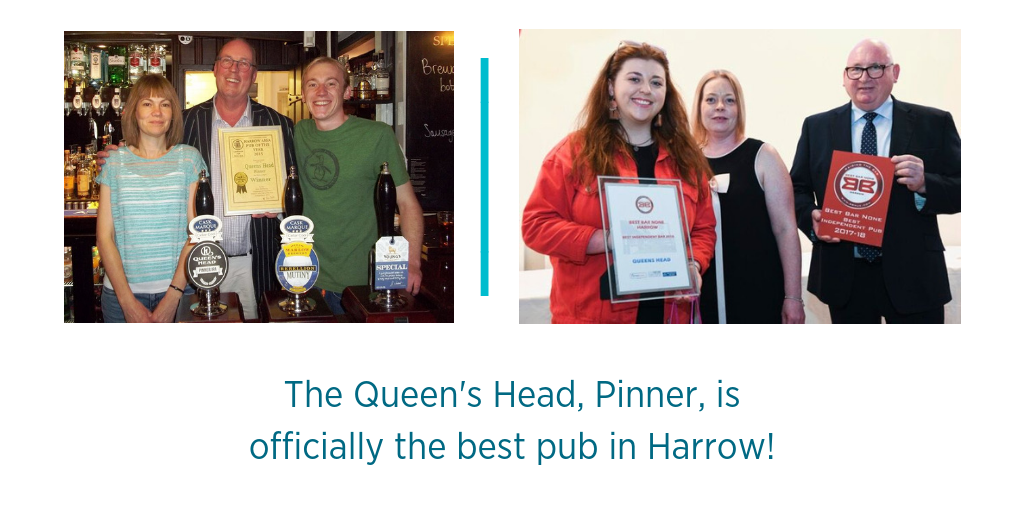 We are aware that abusers do use pubs, and we look for behaviours which would suggest that the person accompanying them is uncomfortable, feeling bullied or threatened. Body language can reveal a great deal about a potential abuser. The pub employs zero tolerance policies for all of our customers and staff, and any kind of offensive or sexual remark results in a person being barred from the pub permanently.

We would like to think as an organisation, if we work together with UK SAYS NO MORE and Hestia we can work towards a work where the tyranny of domestic violence could be ended, and properly consigned to history.

Bright Sky is a free to download mobile app providing support and information to anyone who may be in an abusive relationship or those concerned about someone they know.