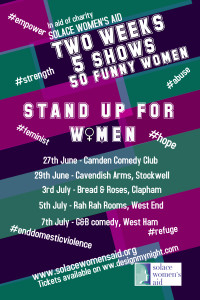 STAND UP 4 WOMEN – In aid of Solace Women’s Aid.

Over the course of two weeks, there will be five fabulous comedy nights which will feature over 50 women in order to raise money in aid of Solace Women’s Aid.

All these women are empowered and of course extremely funny!

Find below the details of the five events, and where you can purchase tickets.

Considered one of the best open mic nights in South London. The night regularly attracts up-to twenty performers three nights a week and we are thankful that they have allowed us to hijack one of their nights to help us raise money. You’ll be guaranteed a good laugh and the comedians have a chance to have a free drink on the house if the audience shouts BUY THEM A DRINK!
Doors open at 7pm – FREE ENTRY (bucket donations at the end)

The Rah Rah Room is a place where effortlessly stylish modernity goes hand in hand with good old-fashioned fun. The night will featuring some of the best up and coming professional comedians;
Including Bec Hill, Viv Groskop, Sadia Azmat, Pippa Evans, Elf Lyons, Lolly Adefope
Tickets – £15.00 in advance – £20 on the door – £10.00
Doors open: 6.45pm Show starts: 7.30pm. Find the event on Facebook.

The promoter, Kyle Wallace runs ones of the most popular open mic nights amongst comedians. Doors open at 7pm – FREE ENTRY (bucket donations at the end).

Find out more about the events at: SolaceWomensAid.org.