25% of the LGBTQ+ community are, or have been in, relationships that include violent or threatening behaviour.

This is the same rate of abuse against heterosexual women in comparison to LGBTQ+ Domestic Violence and Sexual Assault.

The problem is often under reported, as those are who are seeking help are often afraid of disclosing their sexual orientation, or the nature of the relationship they are in.

The types of abuse experienced can include emotional bullying, physical aggression, threats that will bring harm to a friend or family member, being isolated from social interaction, control of finances, jealousy as well as the lasting impact on the abused partner. Some aspects of abuse are unique to LGBTQ+ relationships.

As a method of control, the perpetrator may threaten to ‘out’ the victim to friends, families, co-workers and religious communities. As there is a lack of support for the LGBTQ+ community, the abuser may use this to control and force their partner to comply with their behaviour.

Perpetrators may use their partner’s sexual orientation or gender identity to abuse, or make their partner believe their feelings are linked to them being lesbian, gay, bisexual or transgender.  This can be a result of the perpetrator’s personal insecurity, low self-esteem in their sexual orientation or gender identity. This situation can be allowing internalised feelings of homo/bi/transphobia to develop in the victim.

Information and help is often reduced for the LGBTQ+ communities in relation to domestic violence and sexual abuse. As there is a larger emphasis on heterosexual relationships, the greater public’s understanding may believe this is not an issue within LGBTQ+ relationships. The level of support may not be there as the victim’s experience may not be recognised as domestic violence.

Isolation from the Community:

The foundations of the LGBTQ+ communities rely solely on the close network and friendships that are formed within. An abusive partner may want to prevent their partner from any contact to the community which adds difficulty to the victim finding help.

Revealing your sexuality or identity to police or specialist services may be difficult for some victims so they remain silent for fear of homo/bi/transphobia. Victims may believe this will contribute to a negative opinion on the LGBT community that could cause stereotypes.

You can use the How to Help postcards to start a conversation and learn more about how you can help an LGBTQ+ victim of domestic violence or sexual assault. 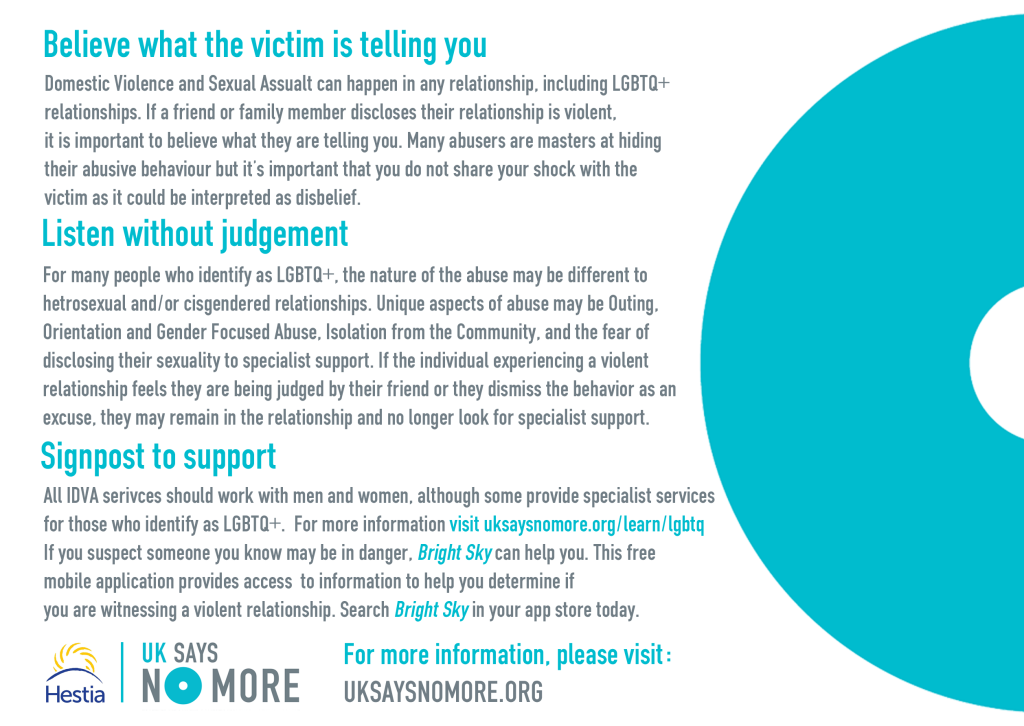 Myths about LGBTQ+ and Domestic Violence and Sexual Assault

“The law does not protect LGBTQ+ people.”

“An incident between LGBTQ+ relationships cannot be about power and control and therefore mutual.”

“Stereotypical gender roles are applied to the relationship when violence is a factor.”

“Leaving an LGBTQ+ relationship is easy because children cannot be a factor and each partner is financially independent.”

The above statements are of course all untrue – common myths which have been perpetuated in society. It is important to know that you are not alone, what is happening is NOT your fault, and that support is out there for you.

If you are worried that you or someone you know is in an abusive relationship, get in touch with Galop, who run the National Lesbian, Gay, Bisexual and Trans* (LGBT) Domestic Violence Helpline.

The UK’s leading LGBT anti-violence charity who for 35 years has offered advice and support to people who have experienced biphobia, homophobia, transphobia, sexual violence or domestic abuse. 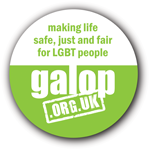 The Outside Project is a homeless/crisis shelter & community centre in response to those within the LGBTIQ+ community who feel endangered, who are homeless, ‘hidden’ homeless & feel that they are on the outside of services due to historical & present prejudice in society & in their homes.

The project is based in the Ripple Centre (125 Ripple Road London IG11 7PB). Visit the Outside Project’s Facebook page for details of upcoming events and support sessions.

You can also check out these resources from Barking & Dagenhem PCT:

Resource for gay and bisexual men

Resource for lesbian and bisexual women

You can find further support resources over on our Get Help page, including specific domestic violence and sexual assault services for women, men, and those experiencing honour-based abuse and forced marriage.

If you are in immediate danger, call 999.